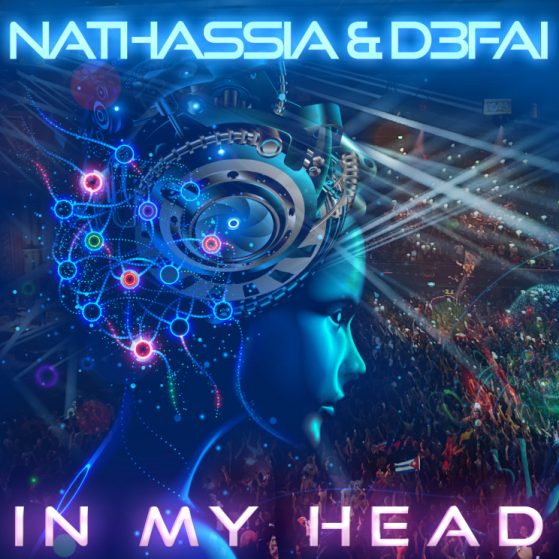 NATHASSIA & D3FAI – In My Head

‘In My Head’ is the second collaboration between Dutch electronic music artist NATHASSIA and one of Argentinian’s hottest producers D3FAI. Following on from the success of ‘Change The World’ which had huge support from KISS FM and was playlisted on Club MTV & MTV Dance International, Clubland TV and reached the MTV UK Top 20.

Electronic music artist Federico Fragala AKA D3FAI (Revealed/Spinnin’/Dim Mak/Outlaw) has been making a name for himself in recent years with support from the likes of Tiësto, Afrojack, David Guetta & Steve Aoki. With official remixes for Hardwell, Steve Aoki plus collaborations with Blasterjaxx and Deorro along with global touring his future is looking bright.

“In My Head” has given D3FAI his first opportunity to showcase his techno production skills which he has been honing over the past 12 months; added to that his notorious Big Room Mix which is on display with Nathassia’s mesmerising vocal performance combining for another fan favourite for 2021.

NATHASSIA (pronounced Natasha) being half Dutch & half Indian, emanates a rare quality. Her vocal style, music and live performances bring together both eastern and western cultures in spellbinding style.

Described as “TORI AMOS FOR THE KISS FM GENERATION”, “PJ HARVEY FOR THE CLUB ENVIRONMENT” & “THIS GENERATIONS KATE BUSH”.

Having tasted initial global success as a featured artist including A List on UK Radio & live on Dutch national radio with the likes of Soulcast & Moonbeam NATHASSIA has gone on to successfully forge her own style & sound as an electronic music artist with recent support from Blasterjaxx, Andi Durrant & BL3ND